Notes from a Mid-Summer's night....

Greetings,
It has been a busy and successful summer....we've spent most of it hiding from the sun....as we all know, the wicked play in the darkness....
We'd like to take a moment of your time to thank the malcontents that are Prometheus Burning for a brutal evening at Displaced & Disorderly. This was one of our most successful events and we can't thank them enough for including us in the release of their new album "Displacement Disorder" and letting Macabre stab herself multiple times and dance around like a large, angry bird on your stage (it's what she does best). Thank you to everyone who came out and supported the underground that evening.
On to new debauchery.... We are pleased to announce that we will be joining all of the creeps at Horrorfind Weekend Convention in Gettysburg, September 3-5. We will be peddling our limbs and oddities in the dealer room all weekend. http://www.horrorfindweekend.com/ There are still weekend passes available, but hotel accomodations are filling fast. We hope you will come out and join us for the weekend.
(Note: If we're not at our booth, we will be found kneeling at the feet of Nivek Ogre and Clive Barker.)
In preparation for convention, we will be pumping out new oddities regularly for both fundraising for the event in our shoppe and to supply our table through out the weekend. Expect to be seeing our patches, shirts, and new artworks hitting the shoppe throughout the upcoming weeks. Since the success of the Morose & Macabre Conjoined Twin Coffin patch, we will be adding this to our shoppe for purchase, as it has previously been limited to shows.
We will be joining the Steel City Steam Society on August 21st from 5pm to 11pm at Revolutionaries Cafe and will be displaying a few wares for their Leo Birthday Bash. It'll be a steampunk birthday bash for Leos. You can also find our own Macabre burlesquing her way to their next big to-do in September with her wicked sisters of the Bridge City Bombshells.
In the meantime, we will also be taking the first weekend in August away at the hub of all that is spooky in PA, The Grand Midway Haunted Hotel www.iliveinahauntedhotel.com in Winbur for their exclusive Kerouac Fest. Our wicked, little shoppe will be closed for that weekend we are away.
Until we meet again....as always....
Parting is such sweet sorrow,
Morose & Macabre
Posted by Morose and Macabre at 7:35 PM No comments: 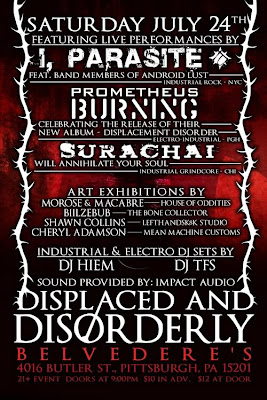 We have been given the pleasure of displaying at Prometheus Burning's CD Release of their new album Displacement Disorder on July 24th with I, Parasite and Surachai. We will be displaying our works along with our fellow artist creeps and our own Macabre Noir will be performing a painful, little number.
We'd like to take a moment to thank Nikki and Gregg of ProBurn, comrades of the deeply disturbed, for inviting us to be involved.
Also, we have updated The House, and it will soon be phasing again....we've been thinking about some redecorating.....it's just never dark quite dark enough in here.....
Parting is such sweet sorrow,
Morose & Macabre


Posted by Morose and Macabre at 9:02 PM No comments: 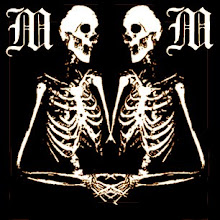